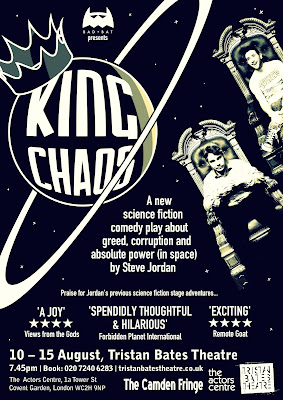 The show ran at the Tristan Bates Theatre in Covent Garden as part of the Camden Fringe Festival, from Monday 10th August to Saturday 15th August 2015, 7.45pm.

It's the future! King Jeffrey, compassion-vacuum and ruler of an evil galactic empire known as 'the Syndicate', commands the universe with an iron fist of idiocy and self-obsession. For years the Syndicate have hunted Tyler and Gary, two petty criminals turned freedom fighters. Having discovered their fortune and rallied an army to their cause, they embark on an audacious mission to capture the Syndicate throne and end Jeffrey’s reign of terror and incompetence. They succeed, but... what are they supposed to do now?

Can Tyler and Gary put their differences aside to make the universe a better place, or will their egos make things infinitely, impossibly worse? Just who are the good guys anyway? Power corrupts, and there is only room on the throne for one... You won't want to miss this fast-paced game of intrigue, cunning & stupidity!

Selected Praise from the Camden Fringe 2015.

★★★★ - 'Bad Bat have established themselves as seriously hot talent in sci-fi comedy and will surely continue to capitalise on that well-earned reputation. In space, no one can hear you scream. In the Tristan Bates, everyone can you hear you laughing. Because you are.' - Views from the Gods

★★★★ - '... the arguments made for 'pragmatism versus idealism when in power' make a lasting impression, especially as Tyler and Gary are essentially Trinculo and Stefano (from The Tempest) who find they unwittingly actually have the power to change things' - Female Arts

'King Chaos sets a cracking pace right from the start and never lets up. All (the cast) are excellent and clearly having fun – their enjoyment is infectious. Writer, producer and director, Steve Jordan has created a wonderfully silly and comic sci-fi universe that, with all its nods and winks to other works, stands very much on its own two feet.' - Camden Fringe Voyeur

'The small cast of four very contrasting characters are an absolute delight to watch. The entire hour of the play is joke after joke so there is very little pause between laughs... would make a great television show (Blackadder meets Dr Who) with its fun-filled adventures...' - A Younger Theatre

'King Chaos is, without a doubt, the nerdiest piece of theatre I have seen in a long time. And it was hilarious... possibly the best feature of this show is that, under its light-hearted, comical surface, it is a subtle but perceptive commentary on political manipulation and the dangers of extreme power. It is intelligent and uplifting, touching on intense themes whilst maintaining its playful nature.' - London Theatre 1

'The idea of absolute power corrupting absolutely, no matter what side you think you’re on, is neatly conveyed, the political points made clear but never upstaging the fun and spirit of the show... wonderful, clever comedy...' - Remote Goat

'The lovable characters and witty, at times deep, remarks on issues are the charm of the play... King Chaos absolutely succeeds in making the audience imagine the different settings of an imperial spaceship. Bad Bat Productions is playing to their strengths by not forcedly putting on a cheap sci-fi stage but focusing on doing justice to the script instead.' - West End Wilma

Words about the Tyler and Gary’s previous stage adventures...

'Any time spent with these characters is a joy.' - Gareth Alexander, Views from the Gods, reviewing Pilgrim Shadow (★★★★), 2013.